What’s new in our collection of boutique hotels?

THE NEW BOUTIQUE HOTELS IN LONDON, KOLN ,  CHENGDU AND ELSEWHERE…

Set elegantly on the Rhine, Cologne/Köln is a sophisticated, modern German city. In December, enjoy the traditional market by the dramatic Gothic Cathedral, whose foundation stones were laid in the 12th century. Drink your fill of local Kölsch beer, then detox in the city’s most famous spa, the Claudius Therme.

When looking for Köln boutique hotels, The Qvest Hideaway hotel Koln answers most design-conscious travellers’ needs for stunning accommodation in the heart of the city. Effortlessly blending the contemporary with the classic, 50s designer furniture and art offers a surprisingly apposite compliment to the hotel’s Gothic

architecture- in its former life, the building was a monastery. The breakfast is served with the kind of panache you see reserved for afternoon teas in England (think cake stands of croissants, cheeses, and smoked salmon) while the cool white interiors lend a sense of calm and wellbeing in the middle of the metropolis.

There’s more to this upmarket west London district than the eponymous movie and annual carnival. Those in search of vintage designer clothing and quirky gifts will love Portobello Road Market, while the area is also home to rum bars, high-end dining options, and traditional pubs.

The Hoxton, Amsterdam
The Negen Straatjes or “Nine Little Streets” area of Amsterdam forms part of the canal ring area: construction began in the 1600s, funded by the wealth of Dutch merchants. Just a few minutes’ walk from central Dam Square and the picturesque Jordaan, the Negen Straatjes is today home to independent galleries, cute boutique hotels, and fine dining. 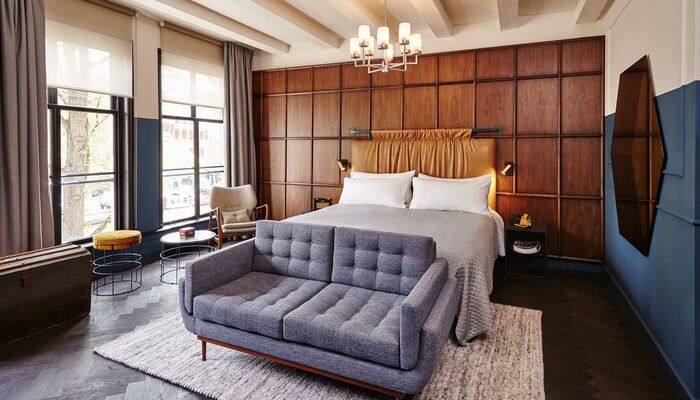 The Hoxton is a gorgeous new boutique hotel with Amsterdam’s historic canal ring. The restaurant, Lotti’s, operates in partnership with the Soho House group, and the food, ambience, and drinks are as special as you’d expect. Set in five grand canal houses, The Hoxton was, in the 1600s, home to the Mayor of Amsterdam, and now houses an event space, 111 luxury rooms, a cocktail den, and coffee bar. 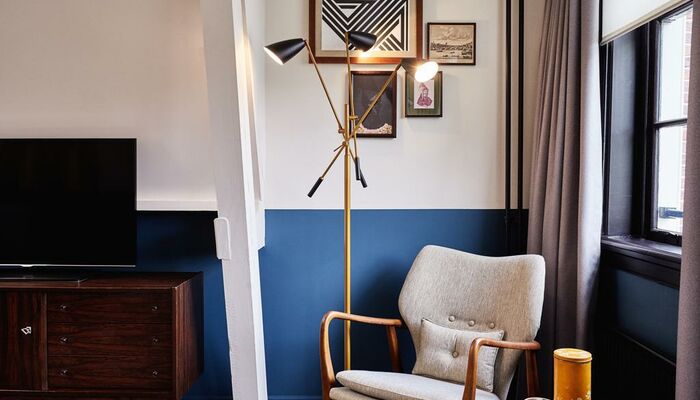 The rooms, as fit the age of the buildings, come in various shapes and sizes, with even the smallest offering chic accommodation, and the largest being grandly and luxuriously appointed.

While Brooklyn may be only one of the five boroughs that makes up NYC, it’s cooler than Queens or the Bronx, and less ritzy than its much-hyped neighbour, Manhattan. Brooklyn is the beating neighbourhood heart of New York: the stunning Brookyn Bridge has starred in many a tourist photograph, and the best NYC pizza and bagels are to be had here.

The Tillary on Flatbush Avenue, in the middle of downtown Brooklyn, offers spanking new and chic accommodation for lovers of style as well as substance. Presented on clean, modern, European lines, the Dazzler’s Brooklyn location means it’s perfect for visits to DUMBO, the Brooklyn Museum, and the Brooklyn Botanic Gardens. For comforts closer to home, the cosy roof terrace has stunning views over the city, while the huge and sparkling bathrooms and sound-proof room windows offer respite from the noise and dynamism of the surrounding city. This boutique hotel is truly the savvy traveller’s choice when visiting New York City. 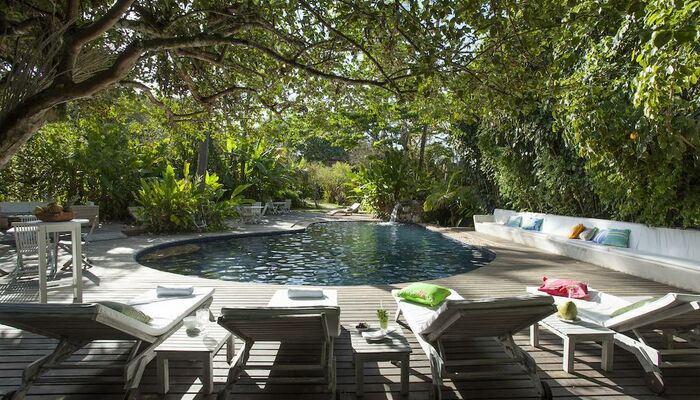 Trancoso’s premier boutique hotel, Pousada Capim Santo, is surrounded by lush grounds filled with vibrant exotic flowers and plump fruits, where small monkeys run free. Unpretentious and yet undeniably luxurious, guests rave about the warmth and quality of the service as much as the piled up breakfast spread at Pousada Capim Santo: think fresh breads and cakes, fruits, juices, pastries, and more, while the bathrooms are fully and generously stocked with all-natural products and cosmetics. The hotel’s gorgeous palm-ringed pool and private hot-tubs, alongside the discreet balconies with hammocks, mean that guests can also relax in total privacy.

The Roman city of Bath was the destination of English high society in the eighteenth century. In 1986, Bath was declared a UNESCO World Heritage Site, and the honeycomb-coloured stone of the Royal Crescent draws thousands of visitors annually, and Bath’s spas are still among the city’s premier attractions.

Furnished and finished by a New York-based design company, The Gainsborough is a 5* boutique hotel par excellence, and guests have access to the naturally mineral-rich thermal waters in the on-site spa. The Grade II-listed building also houses sympathetically restored period accommodation, decorated in soothing, muted neutral tones. As well as a restaurant run by a Michelin-starred chef, the Gainsborough also boasts The Canvas Room, serving up traditional and Champagne afternoon teas, while the Gainsborough Bar specialises in innovative cocktails and fine wines. Based in the very middle of Bath, The Gainsborough is perfect for an indulgent weekend away. 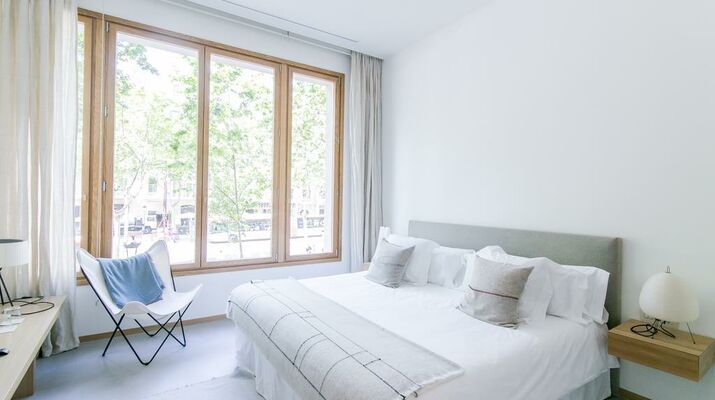 The Eixample is home to Barcelona’s most coveted sight, The Sagrada Família, and is close to Las Ramblas. The architecture in this quarter is stunning Art Nouveau, with Gaudí’s works seemingly littering every street corner. This has always been a privileged area, and it shows: think wrought-iron balconies, chic boutiques, and stunning Catalan cuisine.

Stunning floor-to-ceiling windows in Hotel Margot House mean that rooms are flooded with natural light- and some even look out onto Gaudí’s Casa Batlló on the Passeig de Gràcia. With just 9 rooms, an intimate experience is pretty much guaranteed, while the attention to detail here is superb. Think old-fashioned room key, homemade city guide, and designer candles. With an honesty bar, a kitchen where you can cook for yourself, and strawberries and Champagne as an in-room welcome gift, the risk at Hotel Margot House is that you’ll never actually want to leave to explore the city! 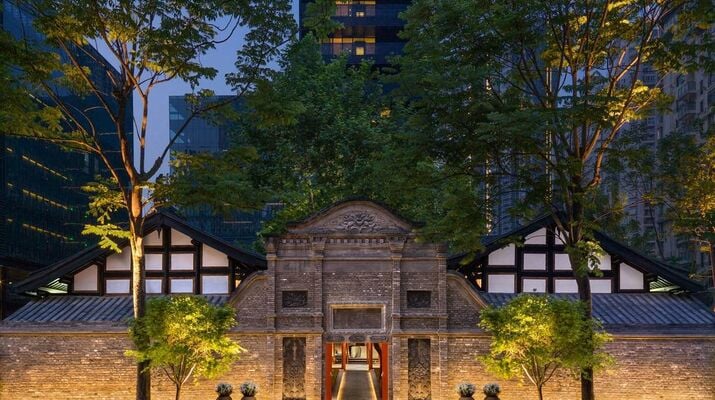 The central Chengdu district of Jinjiang is an up-and-coming quarter, home to Western stores as well as local brands, and increasingly a hip hangout with the youthful local in-crowd. At the same time, they make room for tradition here with tea and mahjong. 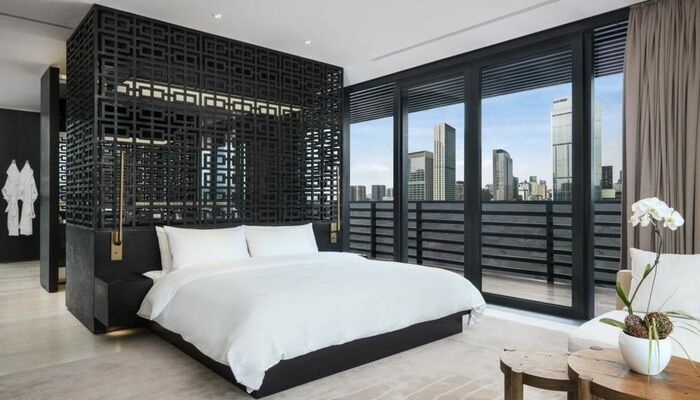 With an ideal blend of heritage and modernity, The Temple House boutique hotel in Jinjiang, Chengdu, represents all that’s best for the visitor about modern China- and the in-house Mi Xun Spa is not to be missed. The restaurant specialises in gourmet international cuisine, while the thoughtful interior aesthetics have a strong European influence- and rooms are fully equipped with sleek new technology. Neither flashy nor brash, The Temple House simply offers comfort in stylish surroundings: set in a stunning period building among the city skyscrapers, this perfect boutique hotel serves some of the best cocktails in town.